You saw an amazing orchid, one like no other you’d ever seen before, and you just had to have it.  Perhaps it was purple and it was Vikings season?  Or maybe it was green and it was around St. Patrick’s Day?  Or maybe you were hosting a baby shower and lucked into a baby blue and pink one?  What a flower it was!  And you enjoyed it for several months, did everything right, and then it started to grow another flower spike!  Awesome!  Success!  How exciting to look forward to more colorful blooms!

And then the flowers started to open.  Only then did you notice that something was wrong.  Your beautifully colored orchid was no longer the same!  It was now white!  What the heck happened?  As it turns out, your now white blooming orchids always was white!  It was just manipulated by some very clever humans to change color!  During the flowering process, dye is injected into the plant through a small hole in the developing flower stem.  As the plant is watered, the dye will travel with the water into the flowers, thus changing their color from white to the color of the dye.  Unfortunately, once those initial flowers fade, all that is left is the underlying, original color of the flowers, which is usually white.

So, bottom line, you did nothing wrong!  And rather than lamenting the flowers that you no longer have, why not appreciate all the new flowers you have to look forward to!  And let’s not forget the fact that you were successful in growing and reblooming this plant – I’d say ya done good!

Welcome To The OSM

This society is organized and operated for educational purposes. The Society seeks to increase and disseminate knowledge, appreciation and improvement of orchids; to conduct or cause to be conducted the development and improvement of orchid growing; to disseminate information concerning the culture, hybridization and appreciation of orchids to members of the Society and the public at large by means of public exhibition, publications and other appropriate means. 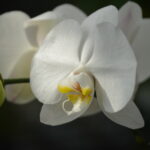